In 1929, a number of Freemasons took the initiative to found an English-speaking Lodge in Rotterdam, probably to provide a Masonic home-from-home to the many English-speaking Masons who lived in Rotterdam at the time. Among them were merchants, shipping agents and others involved with the extensive shipping activities in the port of Rotterdam .
Those who signed and sent a petition to this effect to the Grand East of the Netherlands on the 9th of January 1929 were Brethren P Deys, Wallace T Platt, GV Hartree, RW Berkhout, G Dulling, B Massey and J Springer. Exactly why they wished to found such a Lodge is mostly hidden in the mists of time and so are the qualifications of the petitioners.
What we do know, however, is that the Grand Master at the time, M.W. Bro Hermannus van Tongeren granted a Warrant on behalf of the Grand East of the Netherlands on the 16th day of the 4th month of Anno Lucis 5929 to Lodge Concord under No. 134.
M.W. Bro Hermannus van Tongeren consecrated the Lodge on the 16th of October 1929. The first Master of the Lodge was W Bro Wallace T Platt. As it is custom for each Lodge under the Grand East of the Netherlands to select a specific lodge colour, it was recorded that the colour of the Lodge was light blue, probably to enable members to wear English regalia. 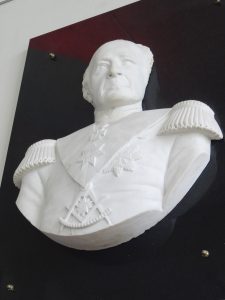 Originally the Lodge worked the 1928 Dutch ritual which was translated into English. All records of the Lodge were unfortunately destroyed during the heavy German bombardment of Rotterdam in May 1940, so no further pre-war details or particulars can be traced. Because of the German occupation of The Netherlands in May of 1940, the Masonic Lights were extinguished throughout The Netherlands. This was, of course, also the case for Lodge Concord. A very sad detail is that the Grand Master, M W Bro Hermannus van Tongeren, was arrested by the Germans and transported to the Sachsenhausen concentration camp, where he died in March 1941.
In 1956, 27 years later, it was felt by quite a number of Masons that the time had come to resuscitate Lodge Concord. They petitioned the Grand East of the Netherlands, and a new Warrant was issued.
The resuscitating Members were:

The Consecrating Team consisted of the following Brethren (all from the Grand East of the Netherlands), who afterwards became Honorary Members of the Lodge:

The Installing Officers were:

At the time of the revival the Lodge worked the Nigerian Ritual which was later replaced by the Emulation Ritual.
Today, the members of Lodge Concord originate from all over the world, including Belgium, France, The Gambia, Ghana, Goa, Kenya, Liberia, the Netherlands, Italy, Ireland, Nigeria, South Africa, Suriname, Turkey, Brasil, Venezuela, Spain, and the UK. 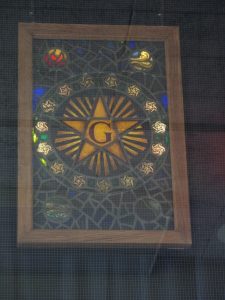 After 75 years, this still proves that Lodge Concord No. 134 is providing a Masonic home-from-home as was originally intended by the founders in 1929.
At present the Lodge has 55 Full Members and 42 Country Members. In the 1970s the Lodge was asked to demonstrate the First Degree Ritual at various Dutch Lodges. A demonstration team (nicknamed the “traveling circus”) was formed and the demonstrations took place, inter alia, in Amsterdam, Rotterdam, The Hague and Dordrecht, which no doubt resulted in Members of other Lodges becoming Country Members of Lodge Concord. Under the Grand East of the Netherlands one can only be a Full Member of single Lodge. Consequently Members of Dutch Lodges interested in the English ritual can only become Country Members of Concord.

Over the years, several Brethren were appointed as Honorary Members on account of their special services to the Lodge. They are:

In September 2002 W Bro A G Daane was awarded the “Laurens Bokaal” at the opening of the Masonic work year in the Laurens Church for services rendered to the Rotterdam Lodges in general.
Over the years a Concord Royal Arch Chapter, a Concord Mark Lodge and a Concord Royal Ark Mariner’s Lodge, all English speaking, were founded in Rotterdam. The core founders were from Lodge Concord.
While this history of Lodge Concord No. 134 is not entirely complete, mainly on account of the Second World War, it certainly provides a picture of a Lodge that has grown from strength to strength during the past 75 years.
Visit our Lodge, our contact page will help you on your way.